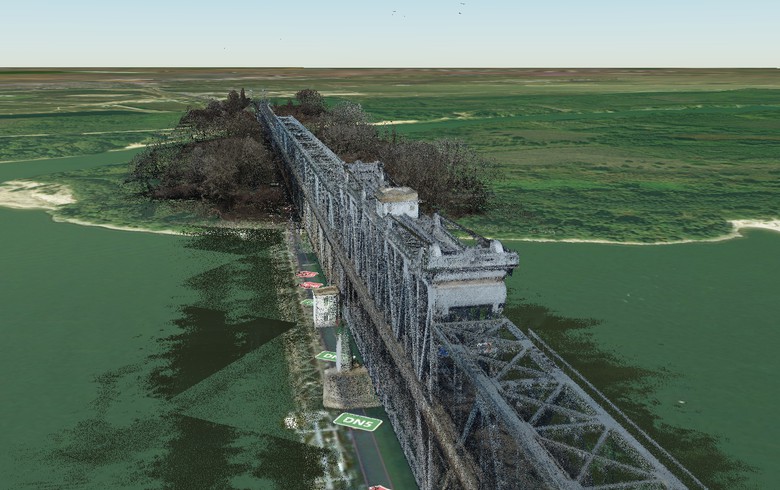 MYX work on digital twin imagery of the Ruse-Giurgiu bridge over the Danube.

SOFIA (Bulgaria), June 15 (SeeNews) - Bulgarian digital twins technology developer MYX has raised 3.5 million euro ($3.7 million) in fresh funds and will deploy a large chunk of it to help boost headcount and scale up market presence focusing on the US, Germany, the UK and France, co-founder Dean Bezlov told SeeNews in an interview on Monday.

The seed funding round was led by Swiss IT and telecoms engineering services provider Connect-44, which provided the bulk of the funds underscoring MYX's strong ongoing focus on the telecoms industry, Bezlov said.

MYX develops so-called digital twins, representations of real-world objects, with the help of its proprietary AI-based algorithms and using geospatial data from satellites, manned and unmanned aerial vehicles, LiDAR and other sources.

The start-up sees a promising niche for its product in the telecoms sector over the next two to four years, in particular through deploying it to aid the 5G network rollout of US and European telecoms majors such as American Tower, T-Mobile, Vodafone and Cellnex.

"We are looking at aggressively expanding our team into markets such as the UK, Germany and US singling senior executives with solid knowledge of the relevant markets," Bezlov said, adding that a new senior appointment is about to be made in the UK.

The US market is particularly attractive, with T-Mobile investing over 60 billion US dollars in its 5G rollout programme, Bezlov noted.

MYX will spend some 40% of the new funds on growing its sales team, with another 40% to go towards more than doubling the number of its IT developers, to 75 from 35 by the end of 2022, and the remainder for other staff expansion. While business development is led by the new hires abroad, the core IT team will remain Sofia-based.

With most of the 350,000 euro in convertible bonds raised in 2021 deployed for product development, telecoms is set to remain the priority sector for MYX in the medium-term.

In Germany, MYX will look at deepening its partnership with American Tower, having fully digitised the US firm's 5G rollout.

Secondary opportunities in 5G will arise for MYX in the deployment of private cellular networks which make use of high-band frequencies in contrast to the mid-band ones of telecoms operators.

MYX has also already completed work for the municipality of Ruse where it created a digital twin of the whole city, as well as work for the two bridges across the river Danube.

In terms of other potential sectors for expansion, Bezlov said that the company is considering a project in Romania, where it will look at partnering with a local municipality to evaluate solar potential for the installation of rooftop photovoltaic (PV) panels for individual use.

With the EU having pledged to make installation of rooftop solar compulsory for all new residential buildings by 2029 as it seeks to wean itself off Russian gas, MYX looks to a promising future in digital twin technology for the energy sector as well.