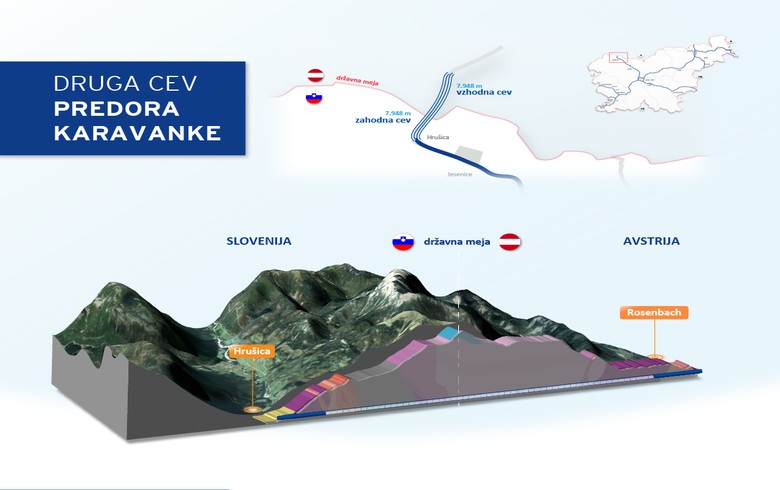 Slovenia's Karavanke tunnel on the border with Austria. Photo: DARS

LJUBLJANA (Slovenia), March 26 (SeeNews) – Turkey's Cengiz has suspended the construction of a 120 million euro ($131 million) second pipe of the Karavanke motorway tunnel in Slovenia, because of the ongoing coronavirus crisis, Slovenian media reported on Thursday.

Works have been suspended because of difficulties with the supply of materials and the housing of workers, news daily Delo reported.

Cengiz launched works on the project only recently after signing the contract for it with Slovenian state-owned motorway company DARS at the end of January and submitting the required bank guarantee in late February.

Also in February, the European Investment Bank (EIB) said it was lending 90 million euro to DARS to finance the construction of the new tube of the Karavanke motorway tunnel, which is a key road connection between Slovenia and Austria.

Drilling works on the Austrian side were suspended some 10 days ago when Austria closed all construction sites as part of measures to limit the spread of the coronavirus on its territory, Delo said.

The EIB has said it will provide a separate 95 million euro loan to Austrian motorway operator ASFINAG to connect an existing motorway in the country to the new tunnel tube.

In December, DARS named Cengiz as winner of a tender for construction of Karavanke's second pipe after the latter lowered its offer to 98.5 million euro without VAT from the originally proposed 99.6 million euro.

The project will increase safety and reduce queues on the Trans-European Transport Network (TEN-T) corridor between the Baltic countries, the Adriatic and the Mediterranean.

The future eastern pipe of the Karavanke tunnel on Slovenian territory, to the border with Austria, will be 3,546 metres in length.